It was last year, while still a new year, that I put myself to a challenge: I set out to design a line of cards and hoped that I would have a cohesive collection by the start of Spring 2014.

The etymologist [that is, word enthusiast] in me poked and played around with a number of words that would act both as conveyors of sentiment and – additionally – happen to contain a word within a word. Ultimately, eight different cards were created. And happily a few shops chose to carry them.

While I am rather pleased from that experience, I am now immersed in expanding on the original concept. Maybe richer textures… free-hand lettering… and so on and what have you!

A very dear friend of mine had a birthday recently. And with her in mind, I designed this image for her birthday card – as this shot of a tree’s roots reminded me of watery waves.  If she could, I believe she would hit the beach every day. Still, life is not 365 days of beach days and there is only one of her.  What if there was two of her? 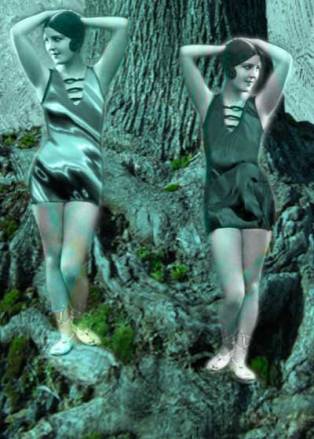 Needing to spend more time in Adobe Illustrator, I began “floating” around in a
mid-century [isn’t everybody?] ether producing this card design.

With my Photoshop creations, those done mainly for my personal expression, my primary concerns are usually with color and balance.  I am greatly indebted to those who provide many open source materials… and there are many generous contributors out there.  With many of my designs, I could not have found better models than those I found on art-e-zine.

In Geisha, I think it’s fairly obvious that I had been obsessed with Magritte for a time… the evidence in the eggs.

While more or less satisfied with Lizard, the result came about as I was still finding my way around photo editing. If I went about a “do over”, I’d make this more high res.