From the archives of Harper’s Bazaar, I was very touched by a 1948 picture that had been taken by Louise Dahl-Wolfe. As we are all now vulnerable, the way in which this [uncredited] model held a handkerchief in front of a porch beam gave me some sense of empathy and reassurance. In my own illustration and more than anything else, I tried to bring out what I sensed – rather than what is seen in the original. 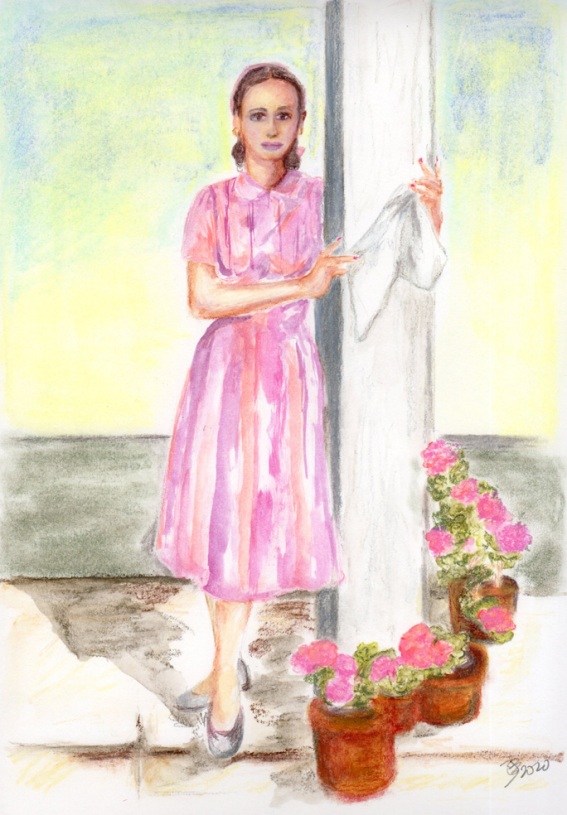 Photographer Louise Dahl-Wolfe [b. 1895, d. 1989] is credited with influencing a number of the most coveted fashion photographers of the Mid-century era. Dahl-Wolfe did so by using naturalized settings and the advancement in producing full color images during the Forties and Fifties for fashion shoots in her role as a staff photographer for Harper’s Bazaar.

Despite having her work exhibited in galleries and museums, Louise Dahl-Wolfe – according to a quote I found online at Museum of Contemporary Photography in Chicago – was not of the opinion that photography could be considered Fine Art. 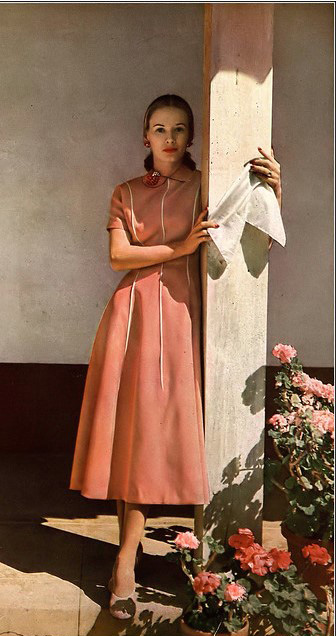 Last year and during a period that I found myself feeling especially grateful and generous, I began a sketch of Milton Glaser with the intention of sending it to him along with a letter of my adoration. What can I say? I got waylaid. I had overworked this little 5” X 7” portrait to an extent that poor Milton looked as if he belonged in a Kabuki theater. Really, awful. I meant to finish it but… and yet…

From childhood to present, Glaser’s artistic and illustrative designs have greatly contributed to my sense of aesthetics. However, Milton Glaser as a mentor [to me and so many others, globally] brought a profoundly strong ethos that he not only embodied but touched upon so generously in both writing and talking on the subject of art. He was a true mensch whose words were often flavored with deeply informed historical philosophies. Anyway, this has been my impression whenever I’ve streamed one of his videotaped conversations; which was quite often as I worked at my own easel.

Imagine the blow I felt when I learned of his death last week! I had to wrestle with the guilt I had for having never finished my little portrait of him… or sending that letter. I picked up that first task again and thanks to an image found on the website artsmeme.com, I pencil sketched Mr Glaser and then, for better or worse, printed out a tracing. In the colorized version, I added a personal favorite Glaser-designed metal sculpture that had been commissioned by The Rubin Museum in New York City. 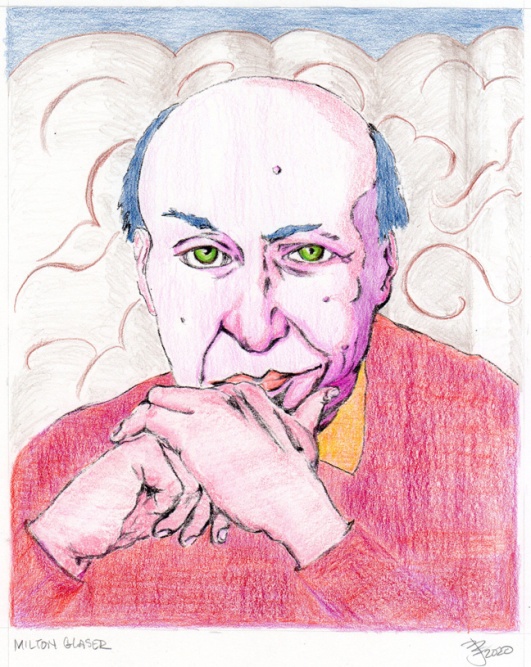