FKA Twigs had first come to my attention in 2016. While “Twigs” initially gained celebrity as a singer, it is both her origins in dance and her magically photogenic presence that drew me to her. And during that year, I had been creating my “Diaphanous” series. [This series can be simply defined as couture derived outlines – sans models.] This painting shown above had been inspired by an Elle magazine feature of FKA Twigs; although only the Salvatore Ferragamo dress as photographed by Paola Kudacki emerges in my work.

In this most recent illustration, FKA Twigs is finally seen and depicted as I have sketched here. This was done first with a mechanical pencil on student grade paper. After which I scanned and copied the image onto a textured piece of card stock so that I could add the chalky black background.

Once again, I owe credit to Ethan James Green for his 2019 editorial photos from Vogue’s October issue. And the gown worn for this feature is Dior Haute Couture.

There is a story behind every created form of expression – and if you are familiar with my online portfolio, you already know that I include little stories along with my posts. With this particular piece I have three [maybe more!] stories, so please bear with me.

In the early 1920s my maternal grandmother Ella Sachse had chosen to study art at what is now known as Moore College in Philadelphia, PA. Many of the tools and supplies she had accumulated have been passed along to me through my mother, including this most recent and astonishing block of cold press Fabriano paper:

In my eagerness to honor this vintage paper I had to reacquaint myself with using watercolors and due to the rough surface of it, I needed to “turn off” my usual insistence of small detailing. As seen below, I realized that the spirit of the outfit was far more important than the brocade panel behind the model.

Now, I have sung my praises of Dior’s creative director Maria Grazia Chiuri before but, honestly, I don’t actually follow her or any other designer with some fanatic intent. Rather, it is Dior somehow finding me – by way of print ads or fashion headlines. The latter being the case when I read that their Spring/Summer 2021 collection of haute couture was born from a rare deck of Tarot cards…

And I have dabbled in reading Tarot cards for over 20 years. While partial to the Thoth method and for those who know little about the Tarot, there are 78 cards in total and within those there are 22 dedicated to archetypes called The Major Arcana. In my personal history with both the Thoth and Rider-Waite cards, I found a particular affinity to The Fool card [#0]. That said, it made perfect sense to me that I would gravitate to Ms Chiuri’s sartorial interpretation of The Fool!

While working on this particular illustration, the existentialist in me went into hyper-drive. You may ask: Two models posing in front of a painting – so what’s the big deal?

May and Ruth Bell for Dior

Sparing you the entire recap, my short list includes Civil Rights, Spiritualism, Symbolism [ala Carl Jung], Community, and Family – by blood and otherwise. The editorial story in Harper’s Bazaar is titled “The Power of Sisterhood”, written by Robin Morgan. My source photo by Jason Kibbler depicts May and Ruth Bell – being twin sisters –  really ignited me into that frenzied stream of consciousness.

Whereas I have one sibling, my sister and I are not twins but perhaps similar to May and Ruth in a somewhat Yin Yang sense of being. I refer to my dearest chick mates as my sisters as well. With all due respect to “Sisterhood”, I also have adopted males – aka my “brothers”. And just as this photo could not have come to light without countless members within a team, my sisters and brothers are imperative to my own work. [You too! You, reading this now…]

Quite integral to the image is the painting behind the Bell sisters: “Durga”, by Diana Kurz. This I had to pare down to some essential elements; two arms & hands upholding symbols, another hand appearing between May and Ruth, the 3 pointed spear and the goddess’ crown*.

I have sung my praises to Dior’s creative director Maria Grazia Chiuri before. However, this? I must sing a refrain!

Which I extend also to fashion editor Miguel Enamorado. Brilliant, on every level!

*In studying what can be seen from Kurz’s painting, I can only surmise that the Hindi goddess is a variation of “Lakshsmi”. As I’m limited in all things Hindi/Hindu, I think I’ve deciphered the following from the elements as selected in my illustration:

Trident [left] represents Desire and/or a combination of Action & Wisdom

Fire [upper left] is symbolic of both Creator & Destroyer of Life

To learn more, go to this link: https://en.wikipedia.org/wiki/Lakshmi

Maybe watching “Madame Bovary” [2014] again – in all of its endless lacing of and tightening in corsets – convinced me to post this little sketch.

Mario Sorrenti is the photographer extraordinaire behind it all here. Hailey B-B [Baldwin Bieber] cinched in a Dior corset/gown from its Spring 2019 collection for Harper’s Bazaar March issue.

Maybe it’s just me. Yet, while flipping through the Spring/Summer 2019 collections I felt a bombardment of exaggeration.

However, Thank you, Maria Grazia Chiuri! Chiuri is the creative director at Dior. As stated on the Dior website, the present campaign came about to embrace “the body in movement”. Nuanced. And gauzy without obscuring.

Within this presentation for Dior, my gaze fixated on only the bottom half of their ad. I had been working on a new triptych for my “Diaphanous” series and it seemed to be lacking… something… So, I have to thank Dior for providing me with an answer, found here: 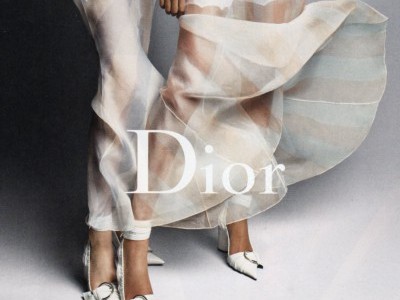